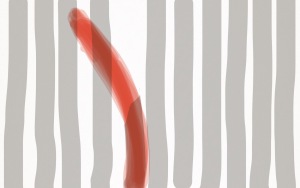 As I was entering the barber shop, I noticed tension on the street. Generally its a busy street especially after the construction of the Mumbai monorail pillars. Over last 2 days, I have been noticing a new addition. A police van, parked right in between a mosque and a chapel. Policemen dressed in khaki uniform, standing outside the van. I assumed that its either for pre- 15 August security or post- Yakub caution.

As I entered the salon, I was surprised to see an deserted shop with hair scattered all over the floor and chairs standing in a mess. It felt as if the salon was busy few moments ago and suddenly everyone disappeared.

A young man in professional salon uniform followed me and asked me to take a clean seat. He was shivering and disturbed. I asked him if he was okay. He replied in a disturbed tone “mujhe bin baat maar rahe hain (they are hitting me for no reason)” … Then he looked out and ran shouting “malik (owner) has come”.

It’s a nice air conditioned hair cutting salon. I still call it a barber shop. New in this area. The owner has another high end salon near by. While the owner is Muslim, his team is comprised of both Hindu and Muslim boys. I like them. They are stylish, hardworking and professional.

I walked out sensing some tension. Policemen, shopkeepers, young barber and his owner were in a mob. Some intense conversation was on. I learnt from other barbers that a policeman came in the shop and asked for some change for Rs 100/-. The barber at the counter had none. Policeman insisted that barber must give change and soon got angry. He started slapping the young man. The young barber was shocked, angry and deeply hurt.

The owner generally sits in high-end salon. He came rushing to the shop when one of his boys went running to call him for help. He maintained his posture and tried to get his boy out of the skirmish.

He came in even more agitated. Fuming with anger. I was already on chair now with another barber combing my hair. I could see his face in the reflection of the mirror. He saw mine and our eyes met. He burst into a violent mix of rage and tears. “H-H-How can he touch my face. how can he h-hit me? I am trying to make a good living. Struggled so much to come out of all that shit. Got married. I am earning a decent living. And he hit me and got away. Just cause he has a uniform. Just cause he is government. If I was in my old world, I would show me. I would teach him…”

It was heart-breaking to see a young man with nice build and heavy baritone, crying. His ego crushed. His ideals questioned. His boundaries deeply violated.

Two of his protectors had deceived him. The police and his own boss. The law-keeper and the king. He was left vulnerable and alone.

I could sense that owner was also concerned but hid his emotions behind a boss-like sternness. He said to the young barber– “why do you have to get in this mess. I know you are right but now its over. He can’t take out the slap from your face. Water has fallen on ground. You can’t pick up and drink… Cool down… You are supposed to please police men not argue…”

Yet the show went on. Barbers were quietly cutting hair. Owner was sitting on cash counter. Our young man was standing, looking blank in the mirror. As if, he could not see his own reflection. The silence, with only sound of scissors cutting, had a piercing quality. With such an unsettled air around us how could they resume the business of grooming. I felt suffocated in the white cloth tucked around my neck and body. I guess all of them felt the same. Young men coming from harsh slum reality to make a career as barbers, were confronted by the barbarianess of the police system.

As they completed my haircut, some more young men gathered around the shop. I learnt that the policemen who hit the barber is considered short-temered and insane by his own colleagues. I looked at the area around police van. There was no shelter or chairs. These policemen were on extra duty, standing, in sun all day due to anticipated communal tension. If I was them, I would have my own pent up frustration. We all know that frustration mixed with power leads to insane aggression.

I wondered, would adding police force on street help? Will they help check the communal tension or aggravate it?

Another little piece of data was sitting on the salon mirror. The policeman happened to be a hindu. The barber was a muslim. And the young men gathering outside the shop, to support the young barber, were not barbers. They didn’t seem trained to groom their barbarianess. They were “provoked!”

Originally posted on Blue Pen Strokes:
Book: Midnight Journey of a Seed Author: Manish Srivastava Genre: Poetry, Philosophy, Self-help, Spiritual Available at: Amazon.in Recommended: Liked It The Covid-19 pandemic had us struggling mentally and spiritually because none of us ever thought such a calamity would befall our modern society with so many amenities and scientific…

To the year that would rest now

Three ways poetry can transform our wounds into compassionate action Indian sprinter Milkha Singh was destined to win gold in the 400 meters race at the 1960 Rome Olympics. After all, he had clocked the world record of 45.8 seconds at preliminaries in France. At the final in Rome, he was leading the race till […]