There is significant difference between appreciating and idolising. 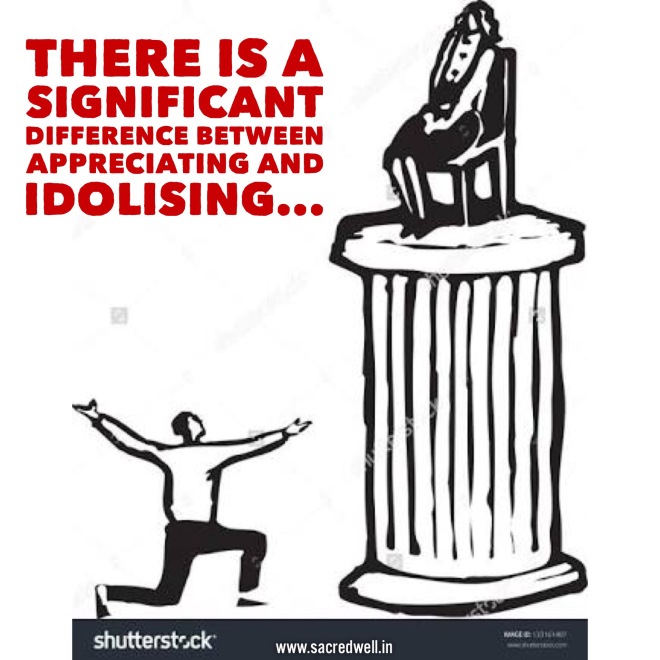 When we appreciate, we acknowledge the good in someone as we do it in ourself. We are at same plane. We learn from them. We honour both.

When we idolise, we put the other on a pedestal. We project all our good on to them. We make them demi-gods and rob them of any capacity to err like human. We free ourself from any responsibility to learn or to hold either of us accountable.

Idolising quickly turns devotees into advocates of the one (or what) they idolise. As if they have an unconscious contract with their idol.

Appreciation on the other hand, leaves room for inquiry. There is curiosity that’s open to both “how did you do that?” and “what happens if that does not work?”.

In appreciation there is a field of “and“. We see the gold in our leaders and we see their limitations. We see their strengths and their vulnerability. We can praise them and we can criticise them.

In idolising, we get stuck in an “either-or” field. We assume that one can either support our leaders or be against them. We can’t see their faults and we refuse to hear any criticism of their decisions. There is no place for nuances. It’s all black or white!

Humans and societies evolve when they learn to appreciate the grey. The nuances. The field between and beyond “either-or”. When they can tolerate an alternate view and see the value even if it’s radical to the mainstream. When they are not threatened by criticism. They don’t have to defend. They resort to child-like curiosity, innocence and acceptance.

Diversity is not merely a threat but an opportunity to learn and integrate.

While idolising, we glorify our leaders and ignore their shadows. If they also promote the same (as most politicians end up doing), sooner than later, we have disasters, failures and corruption.

When we are out of the spell of idolising, we fall flat on earth. Feeling cheated, exploited and used. Desperately looking for another pedestal…

5 thoughts on “Are we appreciating or idolising our leaders? ”